Stevia is my sweetener of choice whenever possible.  It is a naturally growing herb and it seems to have minimal effect on blood sugar.  It is significantly sweeter than sugar so you use much less of it.  I feel better when I use it over other sweeteners.
Of course, there are pesky issues like bitter aftertaste, so it is tricky to work with.  It is generally most successful either paired with another sweetener or used in moderation - too much will definitely give you a bad aftertaste, but just enough is perfect.
I tried Virgil's "microbrewed" root beer at a health food store eons ago, and it wasn't really to my taste.  It didn't really taste like root beer, the flavors didn't meld and I could taste wintergreen but none of the traditional richness of a root beer.  All the wonderful ingredients in the world just didn't add up to a great beverage for me.
So it was with  trepidation I tried Virgil's Zero.  I was attracted by the ingredients once again, but not really expecting much.
I was pleasantly surprised.  It tasted like a very sweet root beer, similar to Blue Sky or Zevia.  I generally prefer a little more of the darker flavors in my root beer but this is one of the few occasions I can say the diet is a distinct improvement over the full sugar version.  It also had a milder carbonation than Blue Sky or Zevia, without being flat.
One thing I did find interesting is the store did not refrigerate this.  As there are no preservatives I usually see Virgil's in the refrigerated section.   It didn't taste "off" at all but it is something to pay attention to, and I would absolutely refrigerate at home.
Ingredients: Purified Carbonated Water, GMO-Free Caramel Color, Stevia Rebaudiana Leaf Extract, Natural Flavors, Citric Acid, Spices. Gluten Free.
Posted by Heather at 7:21 AM No comments:

On a road trip with an upset tummy, I came across Cock'n Bull Ginger Beer, reviewed here.  So while in Spring Lake Park I was delighted to discover they make a diet version!

It has just as much zip as the original Cock'n Bull Ginger Beer, and if you're not a diet soda lover, I think this is a good one to try as the ginger really masks any "diet" aftertaste.   The only real difference is the soda is a little less viscous than the sugar version, which is normal with any diet soda.  I actually prefer this, as sodas with sugar often leave me thirstier than before I drank it!

Lovely amount of carbonation, really tickles the nose combined with the bite of the ginger.  Will repurchase, and soon.  Can't wait to try it in a Moscow Mule.  (Fun Fact, Cock'n Bull claims to be the originator of the Mule!)

Out in Spring Lake Park a new soda shop has sprung up, called Blue Sun Soda Shop.  Check it out, they have a huge selection.  The owners aren't diet drinkers so the selection of sodas in the diet section is a bit chancy.  I kind of had to take Always Ask for Avery's on faith that it is actually diet.  There is nothing on the label to suggest so.   In fact, I had what flavor it was supposed to be, other than a guess from the light amber color.  Was it ginger beer?  Birch beer?  Cream soda?
After tasting the bottle, I still have no idea what flavor it is supposed to be.  I'm really not sure if I got a bad bottle, it was mildly carbonated, a little sweet, and...that's it.  No real flavor at all.

My husband finished the bottle for me as this would have likely been a drain pour.  I'm not willing to drink a pop without knowing if I'm drinking saccharine or sugar or who knows what, and there was no flavor to it.  I moved on to a delicious ginger ale I'll be reviewing soon.

Posted by Heather at 8:11 AM No comments: 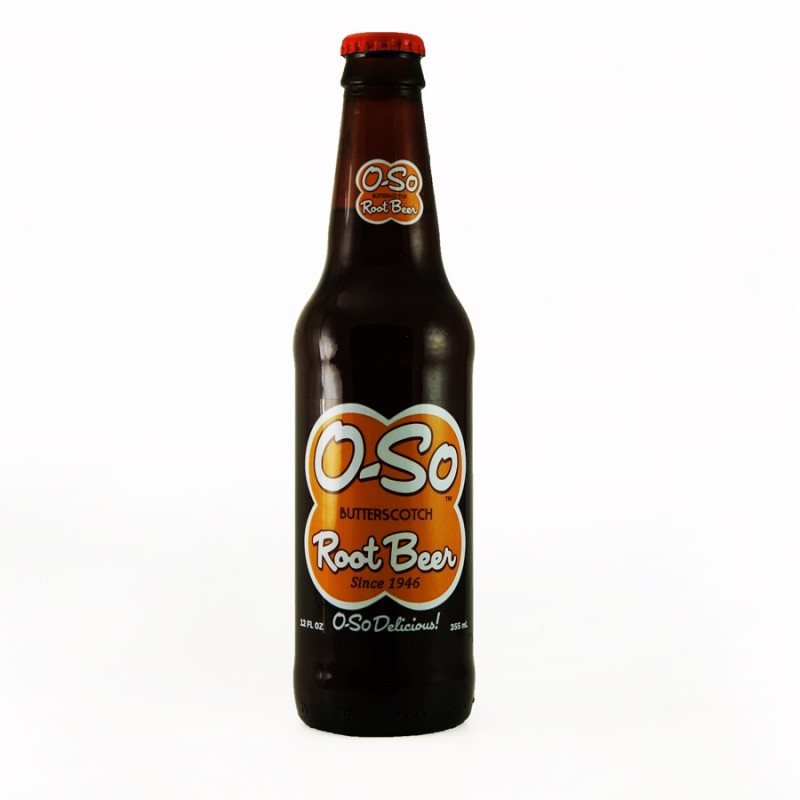 On the same trip to Fizzy Waters where I picked up the god-awful Dog N Suds Root Beer I picked up a bottle of O-So Butterscotch Root Beer.  O-So is a vintage brand, one of those our parents grew up with but ceased production at some point during the Pepsi/Coke years.  At first I assumed it was brewed by O'so Brewing Co, which makes tasty beers, you should try them, but although they seem to have some gourmet sodas in their tap room they are a completely different entity.  A little more research tells me that O-So is actually now being bottled by Orca Beverage Soda Works, along with many other beloved favorites like Cock'N'Bull Ginger Beer and Dad's.  Whether or not it is the same, original recipe, I can't tell you, but O-So Butterscotch Root Beer is delicious.  Nice, foamy head and a candy-like flavor.  This is really a butterscotch soda, not a root beer, but why quibble over terminology when you have a soda this yummy?  This is definitely a dessert soda, it is very, VERY sweet and would make an amazing float that would make Harry Potter jealous.  (butterbeer reference, in case you didn't pick up on that)

We decided to take a drive up the North Shore in the middle of October.  For Minnesota, it wasn't a bad October day at all, it was warm enough to lose the extra sweater up by Gooseberry Falls.  We brought our GIANT WHITE DOG along, and he got thirsty enough to try to drink Lake Superior.  We got thirsty too, and decided to stop by Fizzy Waters in Duluth on our way home.  Fizzy Waters is a great soda shop located in Canal Park, and part of the fun is mixing and matching your own six pack.  I'm absolutely loving the craft soda shops popping up in Minnesota.

One of the root beers I picked up that day was Dog N Suds.  I'll admit the name drew me in, the big fluffy dog in the back seat may have swayed me a bit.

DO NOT BUY THIS ROOT BEER.  Honestly, I'm hoping I just got a bad bottle.  It actually tasted a little alcoholic, but in the wrong way, as though it had started to ferment, and it was so overly carbonated you couldn't even pour it into a glass.  After one sip the rest went down the drain.  If I ever find it on tap, I might give it another try, but this was undrinkable.

I'm  a big believer in the healing properties of ginger.  Not only does it soothe nausea, prevent motion sickness better than Dramamine, it is an anti-inflamatory that can help rheumatoid arthritis and menstrual cramps.  It is also yummy.

After several days of Paschal celebrations my belly was definitely in need of some soothing, and I picked up some Reed's Extra Ginger Brew.  Because if some ginger is good, extra ginger is better.

To start with, I like my ginger beers quite spicy.  This ginger isn't terribly strong, it is there but it won't leave your mouth burning.  It is sweeter rather than bite-y.  There is also a strong fruity aftertaste, probably from the pineapple juice as again, it is sweet rather than sour.  Nice amount of carbonation.

This is not my favorite ginger beer, but good in a pinch.

Posted by Heather at 8:29 AM No comments:

On a slightly chilly April afternoon we decided to check out the one-year anniversary party of a gluten-free brewery called Burning Brothers.  Don't let the gluten-free part scare you, this is beer the glutenous and the gluten-free can enjoy. But you can't have the Orange-Blossom Honey- that stuff's mine.  And better yet,  they are dog-friendly (PSA- don't give your dog beer.)

Of course, drinking on an empty stomach is a recipe for disaster whether or not it has gluten or not, and, being the well-prepared sorts of folk they are, a food-truck set up shop right outside, filled with tasty Indian offerings (also gluten-free).

I noticed they had Thum's Up, an Indian soda I have heard of but never had the chance to try.  Nowadays, Thum's Up is distributed by Hindustan Coca-Cola, but it was originally introduced and produced in India when Coca Cola pulled out of the market.  When Coca-Cola returned to India, they bought out Thum's Up thinking to discontinue it in favor of Coke.  But Thum's Up is far, far more popular than they realized, and decided if you can't beat 'em, profit off of 'em, and thusly Coca-Cola produces it.  Fortunately, they didn't Americanize it, so Thum's Up is still made with real cane sugar.  And alot of sugar it is!

Taste wise, it is definitely a Cola, but with a little hint of something cinnamon. Sweet, but considering the amount of sugar it isn't overpowering.  I recommend it!

Heather
My husband is a craft beer snob and homebrewer. In response, I am a root beer snob, and will be reviewing root beers and other interesting sodas here.